Let’s see now…what was I doing one year ago in February 2020? Ah, yes, I remember…I was housesitting a stranger’s home in France and wandering around the Loire Valley for fun. Hahahahaha….

How long ago and far away that seems now. Just visiting a stranger’s home is unthinkable and forget about travelling to France, eating in tiny, crowded bistros, or rubbing shoulders with thousands of people from all over the world in the Louvre or d’Orsay museums. The world has changed and as always, Calidris does not shrink from candid comparisons.

What do you see is different this February? Let me know in a comment.

I’m not a golfer, but in two places that I’ve travelled, golf carts were the common transport mode: Ko Olina, Hawaii, and Dolomite Camp in Etosha National Park, Namibia. So how did they compare?

Summary: While I’m not sure I’d want to eschew the carts to walk the distances through Dolomite on those uneven, up-and-down paths at night with ravenous carnivores lurking, I do feel there are probably better solutions. In fact, the one thing I really disliked about this camp was the noisy golf carts. From early in the morning, as soon as breakfast is starting to be served, until well into the evening, as the last guests finish their drinks in the bar, the annoying carts roar around. Since everything is built along one path that runs along the ridge, every cart passes by your unit.

Therefore, our Ko Olina cart wins this comparison easily. Now, let’s pack a picnic, throw the towels into the cart, and head to the beach!

Have you visited somewhere that golf carts are the preferred way to get around? Let me know in a comment! 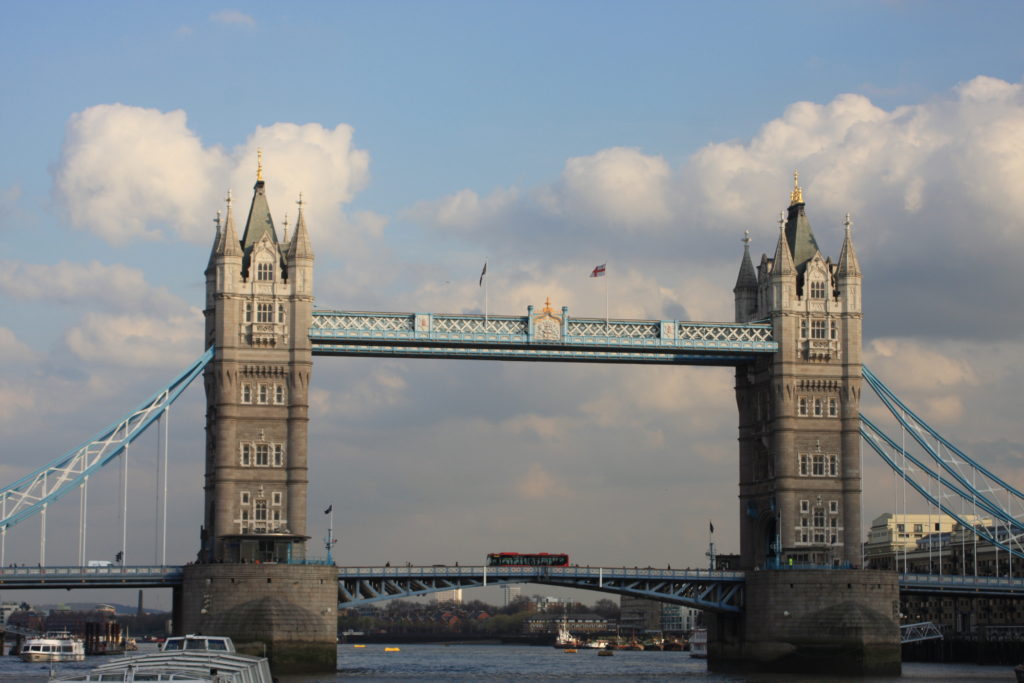 I’m not really a city girl. I prefer natural spaces, quiet, and fresh air over crowds of people, noise, and bustle. But given that cities are hubs of transport, culture, and history, passing through them is nearly inevitable. Two cities that are always worth a stopover are The Big Apple and The Big Smoke. So how do they compare? Let’s take a look.

New York, from atop the Empire State Building. Photo by Marian Buechert.

NY or London: Do you have a favourite? Why? Let me know in a comment. 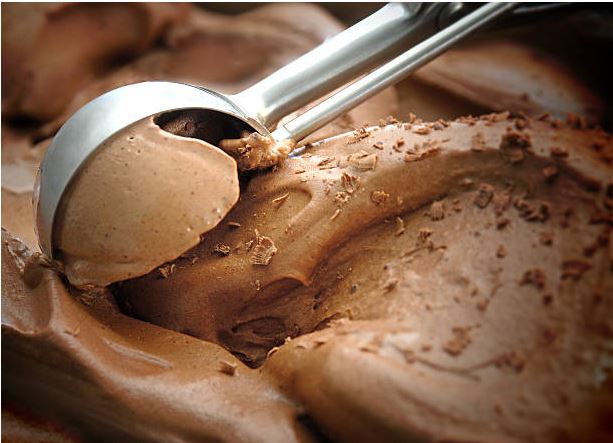 Travel—even around town—can be tiring on a hot day, so it’s always good to know where to find a refreshing ice cream cone.

Yes, it’s a tough job, but someone has to do it: slurping down back-to-back desserts of frozen ambrosia in order to uncover the real story. Bravely, I threw myself into this challenge on behalf of you, my faithful reader.

A gentle reminder that on a baking-hot day, the line-ups for ice cream anywhere can be daunting, and at artisanal outlets, even more so. Mentally prepare yourself to be patient. Only you can decide whether it’s worth waiting for. 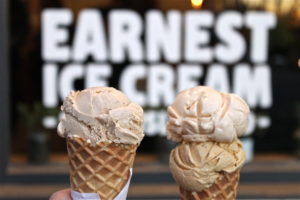 The hype: “Our goal [is] to create ice cream that expresses our passion for flavour and a business that embodies our values.”

As I peered into the glass counter to choose my flavour, I noticed that all of the ice creams were runny and half-melted. When I ordered a cone, the servers looked unhappy and recommended a cup instead, as the ice cream was too soft to put into cones. A bit of a disappointment, but what the heck, go with the flow (in this case, the flow of dripping ice cream), I say.

Sadly, the single scoop was not only half-melted, but it was tiny. Since they weren’t giving me a cone AND the product was substandard, I thought they might be a bit more generous with the portion. Nope.

I don’t know if the skimpy scoop should be blamed on the outlet, the ice cream company, or the servers, but it wasn’t an error, as my companion received an identical small puddle of semi-liquid product. She summed up the experience: “We should have gone to the OTHER ice cream place.” 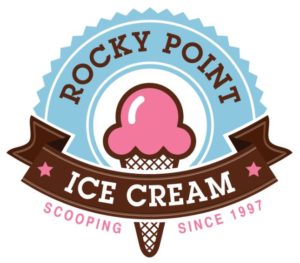 The hype: “At Rocky Point Ice Cream we hand craft ice cream in small batches ‘with love’ using as many local ingredients as possible.”

Waffle cone was fresh and crunchy.

Single scoop was generous—far larger than the Earnest scoop. Plus the mere $1 extra for a double made it hard to resist trying two flavours. So I didn’t. The chocolate peanut butter flavour was also delicious.

Oh, and both flavours were the perfect temperature.

Rocky Point wins this comparison hands down, but to be fair and confirm the results, I should probably repeat the experiment. As soon as possible.

Earnest Ice Cream and Rocky Point Ice Cream are made and sold in the Vancouver, BC, area.

Do you have a favourite local ice cream or gelato? Make your opinion known in a comment. 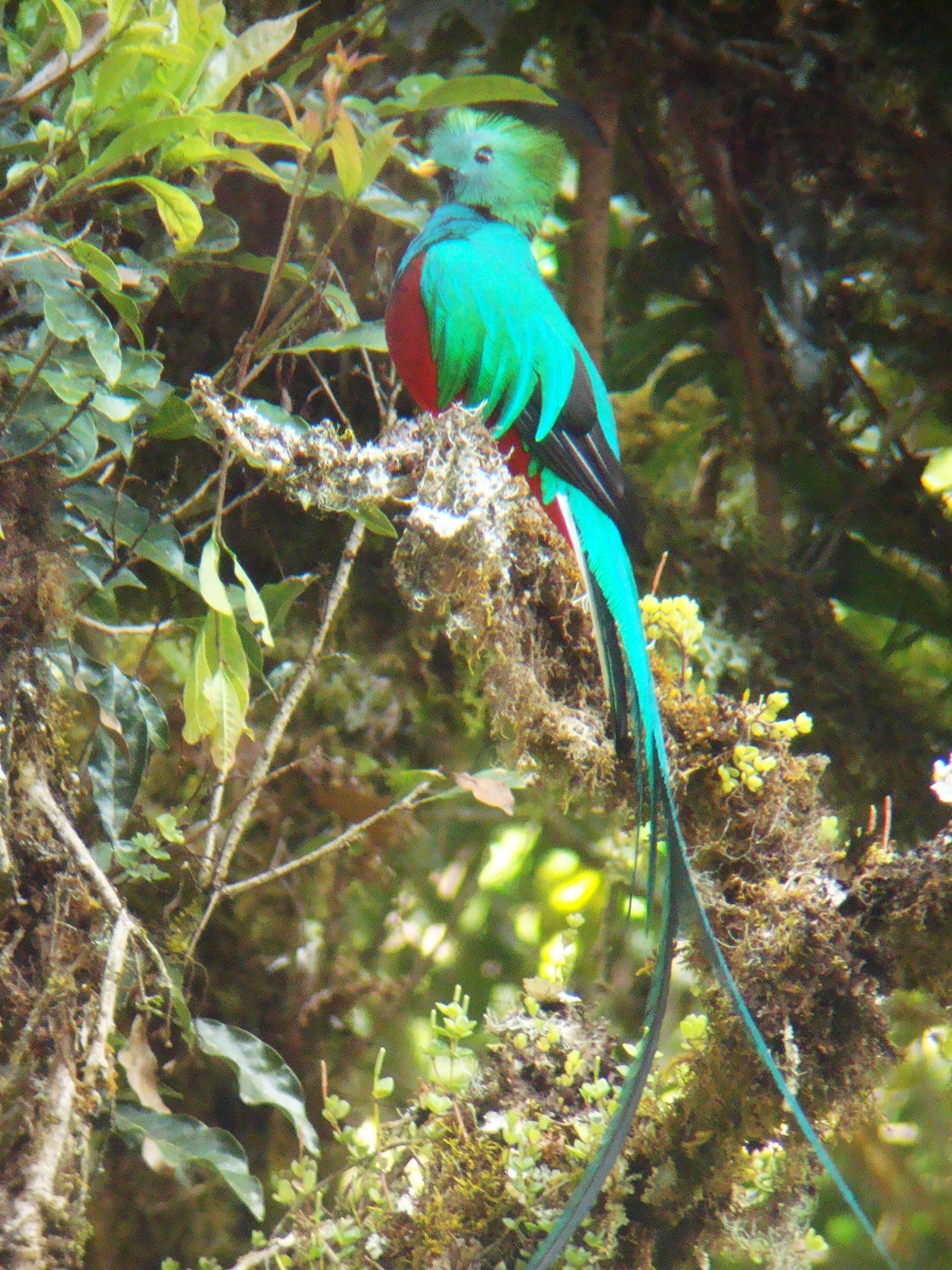 The recent debate in Canada about designating a national bird got me thinking about a couple of other “national birds” I’ve encountered.

Without doubt, one of the most spectacular birds on Earth. With a metre-long tail cascading behind him, the male sports iridescent plumage on his head, back, and wings that shimmers from green to blue to gold, depending on the light, while his breast and belly are scarlet red.

The quetzal’s tail feathers were prized by the Aztecs and Maya, who viewed the bird as the god of the air and as an embodiment of goodness and light. Because it was long believed that the quetzal could not live in captivity, it was also seen as a symbol of liberty.

The quetzal is a celebrity who values its privacy; I once spent an entire day with a specialist guide in the mountains of Costa Rica, seeking the elusive bird. When we finally heard and then saw one magnificent male high in a tree, it was truly breathtaking. We enjoyed its company for a couple of minutes, then off it flew, trailing those fantastic tail feathers.

The quetzal must be the only bird on Earth to have a currency named after it: the Guatemalan quetzal (currently worth about 18 Canadian cents).

Reason for being named national bird: If being the flashiest feathered fellow in the forest wasn’t enough, there’s that historic association with freedom, always a popular theme in nationalism. 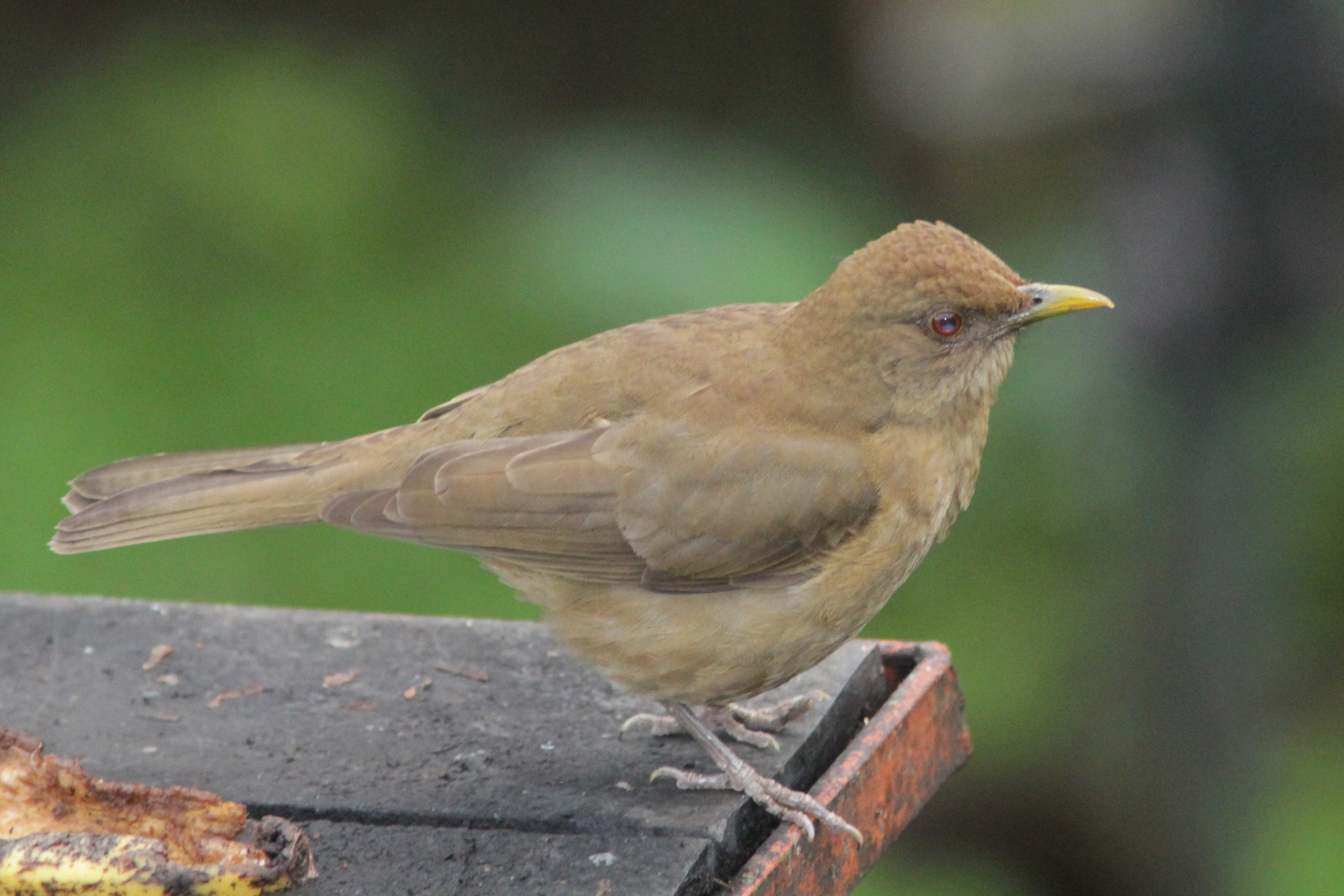 The name gives you everything you need to know about the appearance of this bird: it looks very like our American robin, but with feathers the colour of dried mud. The Latin name is no better: Turdus grayi. Where the quetzal is resplendent, this robin is clay-coloured, with no markings. And where the Guatemalan symbol is scarce and hard to find, the Costa Rican bird—known as yigüirro to locals—is ubiquitous, hopping around human habitation everywhere from city lawns and gardens to rural fields.

On a nature tour near the Arenal Volcano, I asked the guide why, with so many gorgeous birds to choose from, Costa Rica settled on the humble robin. I must admit, I half expected him to say, well, the quetzal was already taken. But his response, while slightly defensive in tone, as though he was weary of having to champion the drab and commonplace bird, was enlightening.

Firstly, the yigüirro has a lovely song (actually quite similar to the American robin’s, to my ear), which Ticos value more than brilliant plumage. That song is most typically heard at the start of the green season, which has led farmers to associate hearing it with the arrival of much-needed rains.

In addition, the clay-coloured robin is found everywhere in Costa Rica, is seen often by everyone, and is thus a better representative of the country as a whole than a bird with a limited range. Because it lives in close association with humans, the yigüirro has become a feature in Tico culture, appearing in folk songs, poems, and stories.

Two countries, two very different national birds. The quetzal is the Cher of the bird world, undeniably exotic, inimitable, and eye-catching, an obvious candidate for glorification. The clay-coloured robin is more like the guy at the hardware store who helps you find the right size of screw: affable, down to earth, getting the job done. Although I initially questioned the Costa Rican choice, I now feel that the clay-coloured robin is an apt symbol for the Ticos I observed: not flamboyant, but going about the business of day-to-day living with an unpretentious determination and a song in the heart.

What national birds do you know? Do you think they are good representatives of their countries? Let me know in a comment. 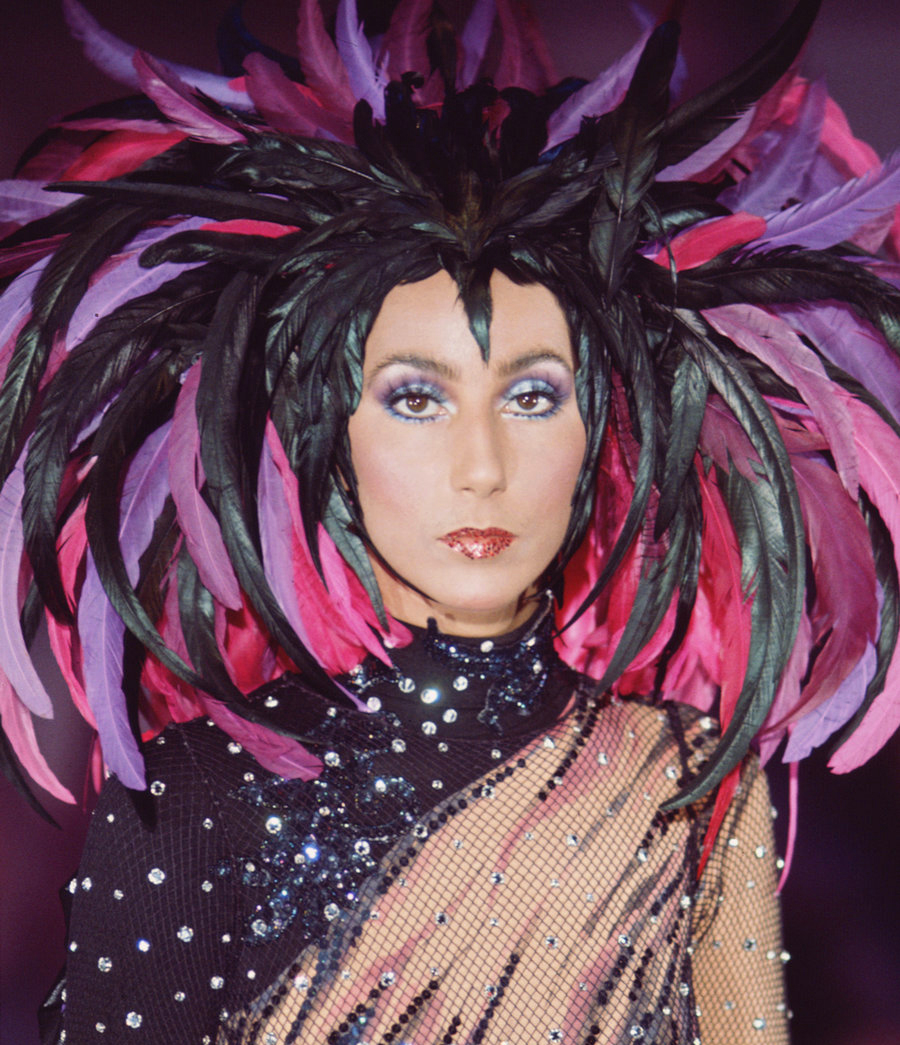 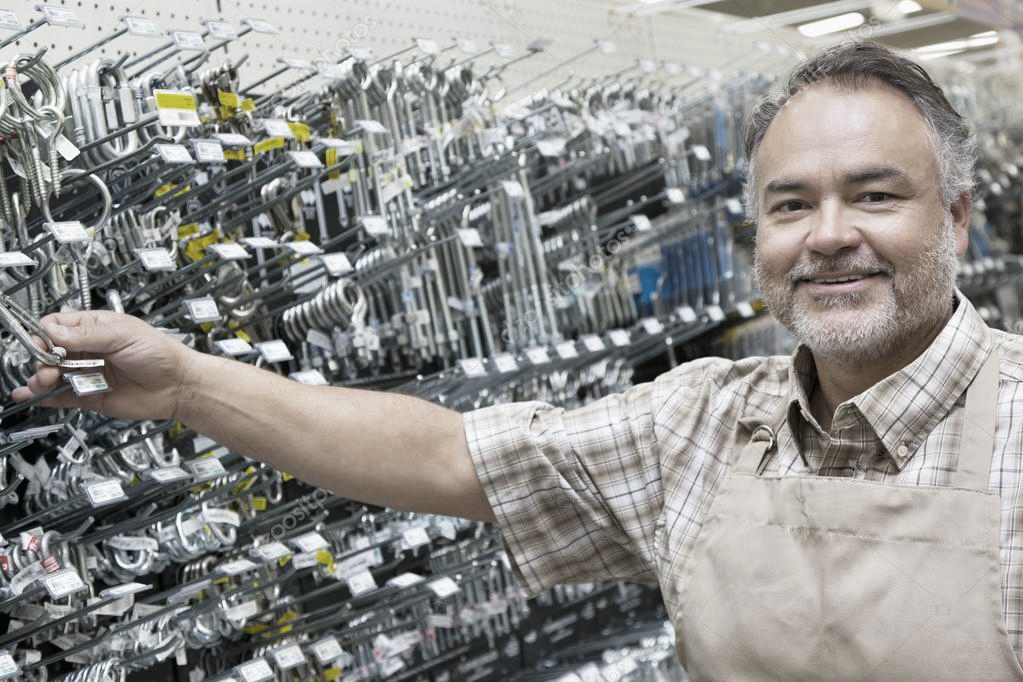