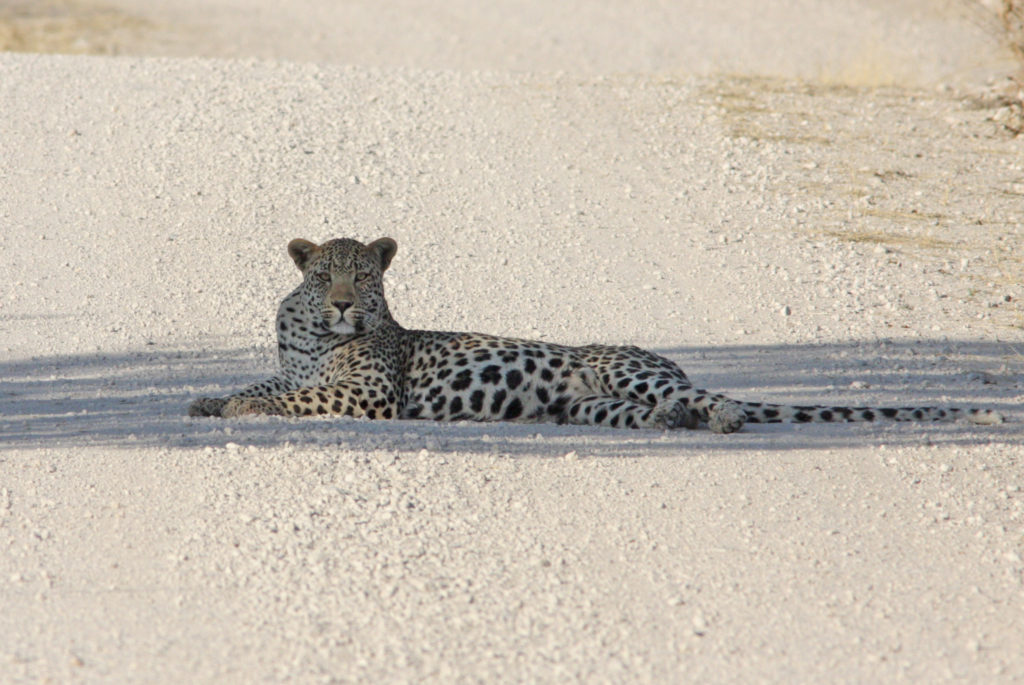 MY road. Photo by Marian Buechert.

One of the greatest thrills of African safaris is that you never know what you’ll encounter. You could cruise for hours, seeing little but dirt and brush, until you’re hot, thirsty, discouraged, and anxious to find a bathroom. What keeps you going is knowing that an unforgettable sighting might lie just around the next bend. Literally.

It had been that kind of day in one of the more remote parts of Namibia’s Etosha National Park. Being at the height of an unusually dry season, many of the waterholes had dried up and wildlife was scarce. We had heard that there were rhinos in the area, but many miles of slow searching had failed to locate any. When the shadows lengthened in the late afternoon, we turned our car wheels toward camp.

As we drove around a corner, I could see a patch of shade thrown across the road ahead. Something was lying in the darkness, enjoying some relief from the desert sun.

“Leopard!” I whispered with intense excitement.

On our first trip to Africa, we had not seen a single leopard. My South African-born friends warned that the spotted cats were notoriously difficult to see, much more so than lions, which tend to laze around in large groups during the day, not paying much attention to vehicles and their ogling passengers. Leopards, on the other hand, are nocturnal, solitary, and usually wary of humans. On this, our second African safari, we had caught only two fleeting glimpses of leopards hidden in the tall grasses.

This fellow, however, was definitely not hiding.

Assuming he would disappear at any moment, we stopped the car a good distance away and I snapped shots with my telephoto lens. The big cat looked unperturbed and showed no sign of concern. He had no intention of moving from his cool spot unless absolutely necessary.

Well, he was in the middle of our road back to camp, where we would be given a serious lecture and possibly even a fine if we turned up after sunset, so we needed to get past him.

We did what one does in these situations: we inched the car forward, stopping every few feet to take increasingly close-up photos of the still-recumbent cat. I eventually had to switch to a shorter lens because he was simply too close for my telephoto.

It is important to remember that in order to photograph wildlife, one must have the window of the car rolled down. Also that leopards are lightning fast, incredibly agile, and completely lethal. The closer we approached, the more I pictured myself lying flat on the seat of the car, dodging the talon-swipes of a leopard plastered against the side of the car with his foreleg stretching in through that open window. But there was no question of shutting the window; I was in the throes of the shutter madness that grips photographers. MUST GET PERFECT PHOTO the imperative screamed somewhere deep in my dinosaur brain, ignoring the danger signals blaring from the more sensible lobes. 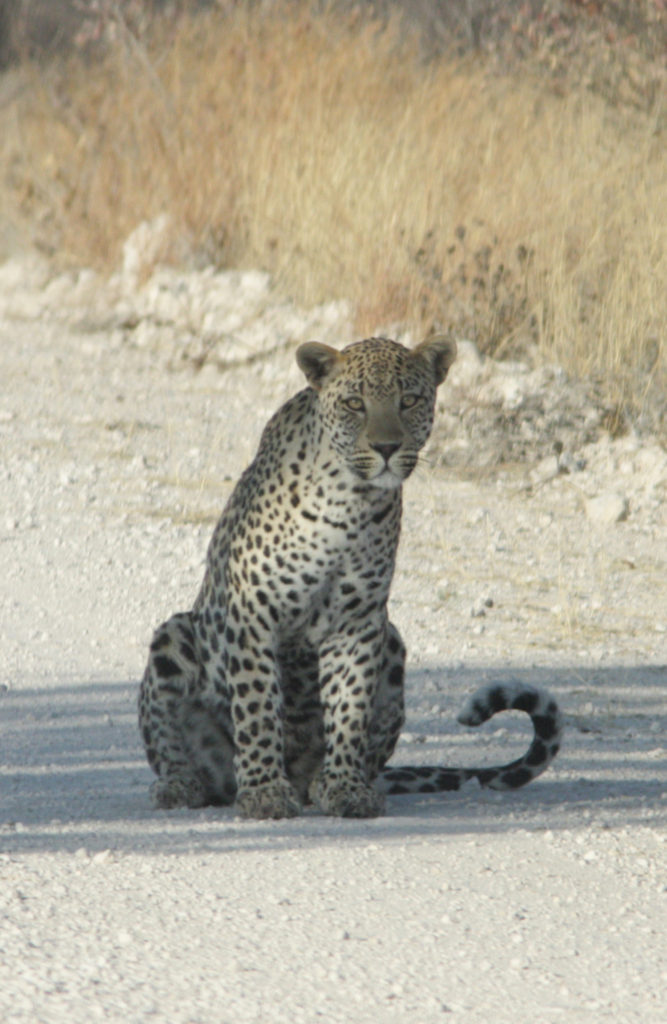 How dare you disturb my repose! Photo by Marian Buechert.

So we crawled closer, until the leopard finally, and with a clear look of being put out, sat up. That was it. He sat and stared at us from a couple of metres away. So much for being wary of humans. His gaze was calm. I looked at his golden eyes and wondered what it would be like to be dinner, knowing those eyes were the last thing you would ever see.

At least now there was room for us to squeeze past. As we did, he decided enough was enough and nonchalantly wandered to the side of the road. For a short distance, he and we kept pace and we could see how perfectly his colours and spots blended into the dry vegetation.

Then we left him in peace and moved on.

At dinner that evening, I proudly showed everyone the photos. The waiter, a native Namibian, was keenly interested. He said he had never seen a leopard before, as he came from a farming area where, presumably, the cats had been driven out long before.

Later, I asked a wildlife expert why “our” leopard had been so cooperative. Probably a young adult, a teenager, he guessed. Cocky and full of himself. Too young and stupid to fear anything yet.

So it was just my luck to run into the James Dean of the African bush. I’m glad we both came out of it alive. 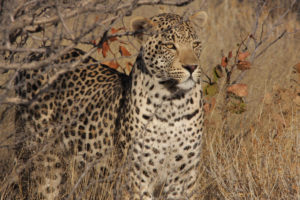 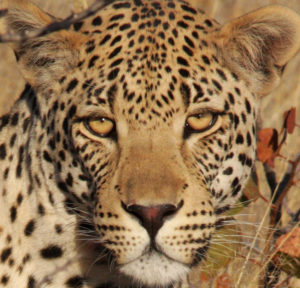 The gaze of a hunter. Photo by Marian Buechert.